Fantastic News!  North Mymms Ladies now have two teams in the SADLBA Finals on Sunday 11th September at Potter Bar BC.  Matches start at 10.00 with our Triples League team facing Harperbury (team members to be decided) and at 1400 our Triples Team of Pam, Bond, Sue Burbridge and Karen King face up to Harpenden.

Other matches that day are the Double Rink and Australian Pairs at 1000, Champiionship Singles at 1300, Officers Singles at 1400 and Pairs at 1500.  (The Champion of Champions will be played on Tuesday 13th September at 1600 at Batchwood Hall BC.)

Player Dress Code is WHITES with CLub tops.  The Umpire is David Bowler.

NORTH MYMMS GIRLS ONCE AGAINST OUTPLAY THE BOYS!

The North Mymms ladies have had an excellent season, and once again they triumphed and the men, er, didn't.  The Ladies won their match with 3 winning rinks out of the 6, but not so the men.   The Jarvis Cup was won, once again, by Northaw and Cuffley.

Two special mentions for North Mymms ladies.   Elaine McNicholas played in the Harvey Cup for the first time and was using Delsa Cooper's woods (see News item below about the Delsa Cooper Cup),  and  Tracy Woods played her first competitive game representing the Club. Both Elaine and Tracy were real assets to the team.   Well done to both of you.  You had a great game and I know all of us at North Mymms will want you to keep playing!

(The photos show the Lady Captains and the Harvey Cup.  You may need to click on an image to open it into the correct perspective.)

The 14th August saw North Mymms play Rye Park for a match in memory of Delsa Cooper, a much missed and loved player at North Mymms who had previously played at Rye Park.  The match was for the honour of receiving new Delsa Cooper Cup which this year was won by Rye Park.  It will no doubt be a regular fixture for many years to come.

The picture shows Dave Cooper present the Cup to the Rye Park Captain. 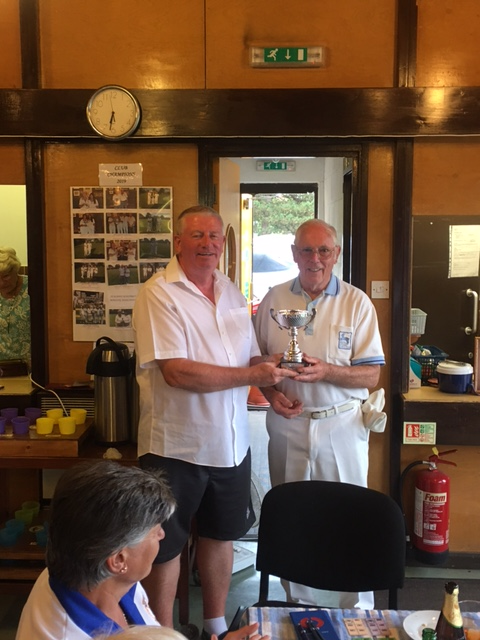 On Wednesday, 4th May 2022 teams from Potters Bar, Harperbury and North Mymms Bowls Clubs, played their Annual Fixture for the Nethercott Trophy. Four teams from each Club met at North Mymms Bowls Club, all hoping to carry off the Cup. It turned into a miserable, wet afternoon and it was agreed that the match would finish after 16 ends instead of the usual 18. Harperbury were unlucky not to win any of their games, whilst Potters Bar and North Mymms each won 3 Games and lost 1 Game. It then came down to Winning Shots. North Mymms won by 13 shots, but Potters Bar were the victors, winning by 30 shots and won the Trophy.

Charles Nethercott, the Family run Funeral Directors, with offices in Potters Bar and Radlett, have generously sponsored this fixture since 2011. As well as providing the Winners with an impressive Trophy, over 50 team members were treated to a Fish and Chip Chip Supper followed by Ice Cream.

Charles was there with his Wife Liz and Daughter Charlotte, to present the Trophy. He intends to retire later this year, but has said that Nethercotts will continue to Sponsor this fixture, which is very much appreciated.   In the photo is the Ladies and Mens Captains from Potters Bar, Susie Thurlow and Michael Brennan, alongside Charles Nethercott. 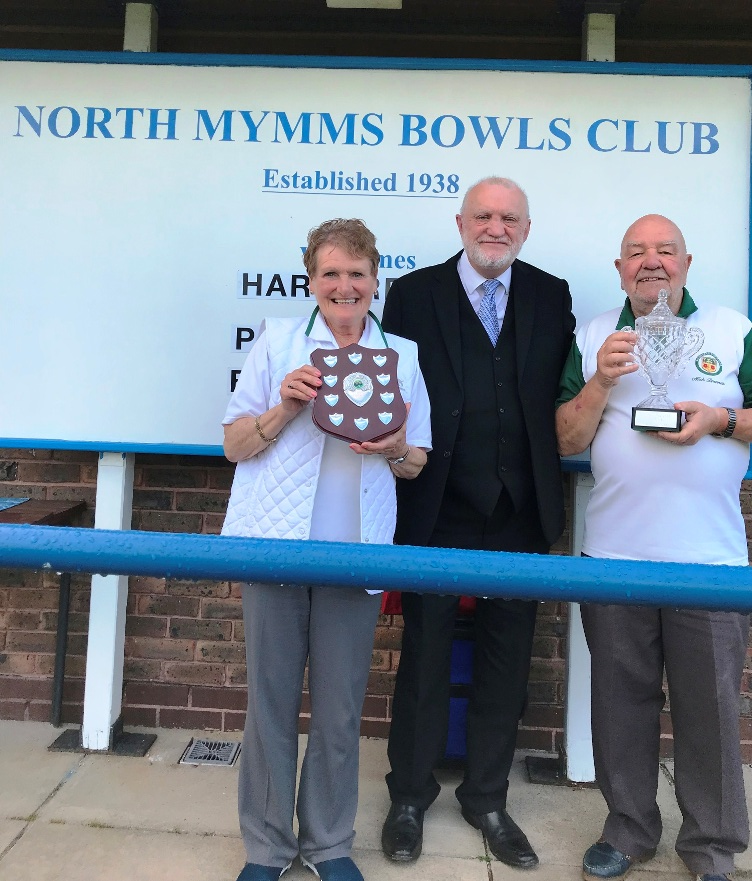